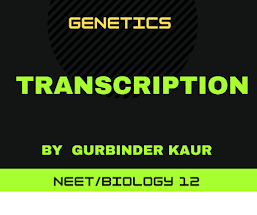 ·         Transcription is also governed by the complementarity of bases as in DNA. (Except that uracil in place of thymine is complementary to adenine).

·         Only one of the strands of the DNA acts as the template for RNA synthesis for the following reasons:

(I)        If both the strands code for RNA, two different (complementary) RNA molecules and two different proteins would be formed; hence the genetic information-transfer machinery would become complicated.

(II)       Since the two RNA molecules produced would be complementary to each other, they would wind together to form a double-stranded RNA without carrying out translation; that means the process of transcription would become futile.

·         The process is catalysed by DNA-dependent RNA-polymerase, which catalyses the polymerisation of nucleotides only in 5’-3’ direction.

·         The coding strand is displaced and does not code for RNA, but reference points regarding transcription are made in relation to it.

·         The promoter refers to a particular sequence of DNA located towards the 5’ end (upstream) of the coding strand, where the RNA polymerase becomes bound for transcription.

·         The terminator is a sequence of DNA located towards the 3’ end (downstream) of the coding strand, where the process of transcription would stop.

·         There are additional regulatory sequences that may be present upstream or downstream to the promoter.

(A)       Transcription in prokaryotes

¾    In prokaryotes, the structural genes are polycistronic and continuous.

¾    In prokaryotes, there is a single DNA-dependent RNA polymerase, that catalyses the transcription of all the three types of RNA (mRNA, tRNA, rRNA).

¾    RNA polymerase binds to the promoter and initiates the process along with certain initiation factors sigma.

¾    The enzyme facilitates the opening of the DNA-helix and elongation continues. 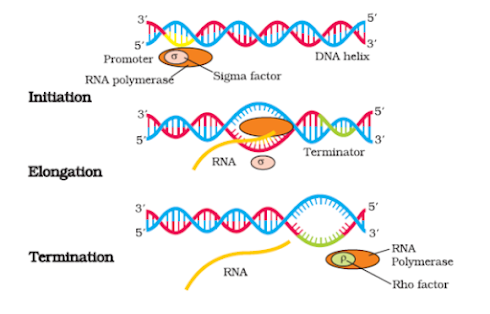 Process of transcription in Bacteria

(B)       Transcription in Eukaryotes

¾    In eukaryotes, the structural genes are monocistronic and ‘split’.

¾    In eukaryotes, there are at least three different RNA polymerases in the nucleus, apart from the RNA polymerase in the organelles, which function as follows: 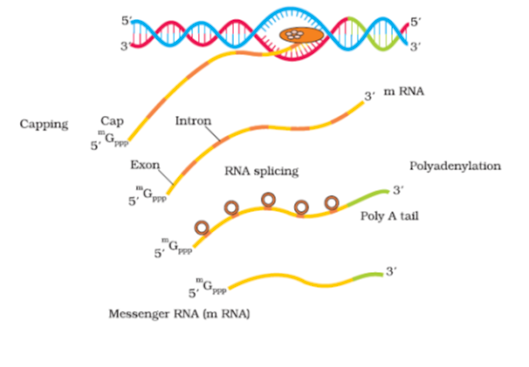 Process of  transcription in Eukaryotes

¾    The primary transcript contains both exons and introns and it is subjected to a process, called splicing, where the introns are removed and the exons are joined in a definite order to form  mRNA

¾    In capping, methyl guanosine triphosphate is added to the 5’ end of  hnRNA. 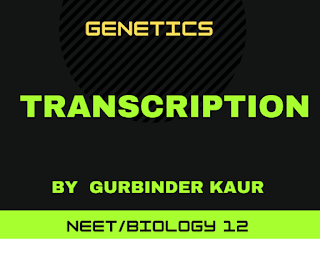 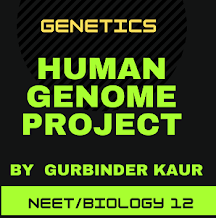 ·         This project was coordinated by the U.S. Department of Energy and the National Institute of Health.

·         During the early years of the project, the Wellcome Trust (U.K) became a major partner; other countries like Japan, Germany, China and France contributed significantly.

·         Its aim was to find out the complete DNA sequences for the human genome.

(I)        Genetic engineering techniques, with which it was possible to isolate and clone any segment of DNA

(II)       Availability of simple and fast techniques, for determining the DNA sequences.

·         Human Genome Project was called a mega project for the following facts:

(II)       If the sequence obtained were to be stored in typed form in books and if each page contained 1000 letters and each book contained 1000 pages, then 3300 such books would be needed to store the complete information.

(III)     The enormous quantity of data expected to be generated also necessitates the use of high speed computational devices for data storage, retrieval and analysis.

·         The project was closely associated with a new branch of biology, called bioinformatics.

(II)       Determine the sequences of the three billion base pairs present in human DNA.

(V)       Transfer the technologies to other sectors (like industries).

(VI)     Address the ethical, legal and social issues (ELSI), that may arise from this project.

(I)        Knowledge of the effects of variations of DNA among individuals can revolutionise the ways to diagnose, treat and even prevent a number of diseases/disorders that affect human beings.

(II)       It provides clues to the understanding of human biology.

(I)        One approach, called Expressed Sequence Tags (ESTs), focused on identifying all the genes that expressed as RNA.

(II)       Second approach, called Sequence Annotation, was to simply sequence the whole set of genome, that included all the coding and non-coding sequence and later assigning functions to different regions in the sequence.

¾    The fragments are then sequenced using automated DNA sequences, which work on the principle developed by Frederick Sanger.

¾    The sequences were them arranged on the basis of certain overlapping regions present in them; this required the generation of overlapping fragments for sequencing.

¾    Specialised computer based programmes were developed for alignment of the sequences.

¾    These sequences were annotated and assigned to the respective chromosomes.

¾    The next task was to assign the genetic and physical maps on the genome; this was generated using the information on polymorphism of restriction endonuclease recognition sites and certain repetitive DNA sequences, called microsatellites.

¾    Following are some of the salient observations derived from HGP.

(II)       The size of the genes varies; an average gene consists of 3000 bases, while the largest gene, dystrophin consists of 2.4 million bases.

(VI)     Repetitive sequences make up a large portion of the human genome.

(VII)    Repetitive sequences throw light on chromosome structure and dynamics and evolution, thought they are thought to have no direct coding functions.

(IX)     Scientists have identified about 1.4 million locations, where DNA differs in single base in human beings; these are called single nucleotide polymorphisms (SNPs).

(I)        Having the complete sequence of human genome, will enable a radically new approach to biological research, i.e., a systematic approach on a much broader scale.

(II)       All the genes in a genome or all the transcripts in a particular tissue/organ/tumor can be studied.

(III)     It will be possible to understand how the enormous number of genes and projects work together in interconnected networks in the chemistry of life.