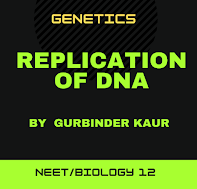 The Process of Replication of DNA

¾   The process involves a number of enzymes/catalysts, of which the main enzyme is DNA-dependent DNA-polymerase, that catalyses of the polymerization of the deoxynucleotides at a rate of approximately 2000 bp per second.

¾    The process is also an energy-expensive process; deoxyribonucleoside triphosphates serve the dual purpose of

¾    The intertwined strands of DNA separate from a particular point called origin of replication.

¾    Since the two strands cannot be separated in its entire length, replication occurs with small opening of the DNA- helix; the Y-shaped structure formed, is called replication fork.

¾    The DNA-dependent DNA-polymerases catalyse polymerisation of the nucleotides only in 5’-3’ direction.

¾    The discontinuously synthesisted strands are later joined together by the enzyme DNA-ligase.

¾    A few additional enzymes (and their functions), other than DNA polymerase and ligase, that are involved in the replication of  DNA are:

ii--topoisomerases -- removes the supercoiling of DNA

iv--Telomerase--to synthesizes the  DNA of telomeric end of chromosomes. 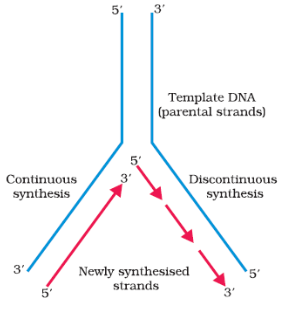