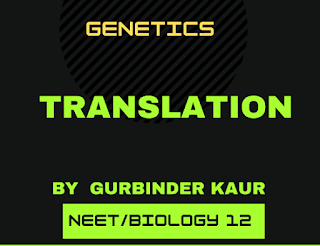 ·         In this process, amino acids become joined together by peptide bonds, to form polypeptides.

·         The formation of peptide bonds requires energy and hence in the first phase, the amino acids are activated in the presence of ATP

¾    In this process, a particular amino acid becomes activated and linked to 3’’end of  their cognate (specific) tRNA–a process commonly called as charging of tRNA or aminoacylation of tRNA

¾    The reaction is catalysed by the enzyme amino–acyl-tRNA synthetase.

(B)       Initiation of polypeptide synthesis

---- The ribosome, in its inactive state exits as two subunits – a large subunit and a small

subunit. (The ribosome consists of structural RNAs and about 80 different proteins.)

¾    When the small subunit encounters the mRNA, translation begins.

¾    The mRNA binds to the small subunit of ribosome, following base pair rule between the bases of mRNA and those on rRNA; it is catalysed by ‘initiation factors’.

¾    There are two sites on the larger subunit, the P-site and the A-site

¾    The small subunit (with the mRNA) attaches to the large subunit in such a way that the initiation codon (AUG) comes on the P-site.

¾    A second tRNA charged with an appropriate amino acid binds to the A-site of the ribosome. 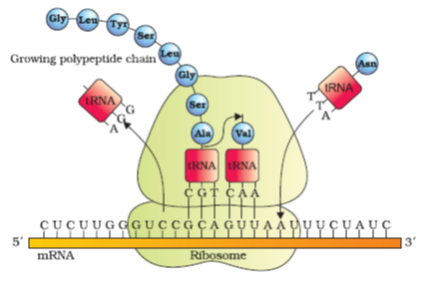 ¾    A peptide (CO-NH) bond is formed between the carboxyl group of methionine and the amino group of the second amino acid  (The ribosome also acts as a catalyst (23S rRNA in bacteria is the enzyme- ribozyme) for the formation of peptide bond.

¾    The ribosome moves from codon to codon along the RNA in the 5’-3’ direction.

¾    Amino acids are added one by one in the sequence of the codons and become joined together to form a polypeptide.

¾    When one of the termination codons comes at the A-site, it does not code for any amino acid and there is no tRNA molecule for it.

¾    As a result, the polypeptide synthesis (or elongation of polypeptide) stops.

¾    At the end, a release factor binds to the stop codon, terminating translation and releasing the complete polypeptide from the ribosome.

¾    A translational unit in mRNA is the sequence of RNA that is flanked by the start codon (AUG) and the stop codon and codes for a polypeptide. An mRNA also has some additional sequences that are not translated and are referred as untranslated regions (UTR). The UTRs are present at both 5' -end (before start codon) and at 3' -end (after stop codon). They are required for efficient translation process.