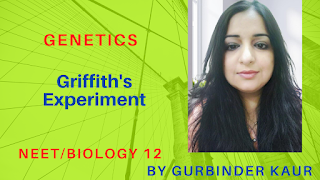 Watch lectures on my you tube channel: https://bit.ly/3Bzgc2k

·         Transformation is a change in genetic material of an organism by obtaining genes from outside as from remains of its dead relatives.

·         He observed, during the course of his experiment, a living organism (bacteria) had changed  in physical form

·         He observed two strains of this bacterium on culture plates:

·         When live S strains (virulent) were injected into the mice, they produced pneumonia and the mice died

·         Mice infected with R strain do not develop pneumonia

·         When heat-killed S strains were injected into the mice, it did not kill the mice

·         When heat-killed S strains were mixed with live R strains and injected into the mice, the mice died and he recovered live S strain  from the dead body of the mice

·         He further explained that some ‘transforming  principle’ transferred from the heat-killed S strain, had enabled the R strain to synthesise a smooth polysaccharide coat and become virulent;

Biochemical Characterisation of Transforming Principle: Subscribe my You Tube Channel

·         They  worked to determine the biochemical nature of ‘transforming principle’ in Griffith's experiment.

·         They purified biochemicals (proteins, DNA, RNA, etc.) from the heat-killed S cells and checked  which ones could  transform live R cells into S cells.

·         They concluded that DNA is the hereditary material, but not all biologists were convinced.

Watch lectures on my you tube channel: https://bit.ly/3Bzgc2k